Home › Activism › Moms are Scary and Lyme and Surveillance

Moms are Scary and Lyme and Surveillance

It struck me today how absurd life is when the CIA visits your blog.

Little me? I’m just a regular mom and wife, with a regular job and a regular house in a regular town. Two cars, some shattered dreams, lots of junk mail along with the mushrooming bills…you know–regular.

There’s really not much that distinguishes me from the next regular mom, except that I have a neurologic disease and I know a few secrets. And I’m not very good at keeping secrets.

Maybe I should be flattered that I’ve had visitors to my site from so many important government agencies. 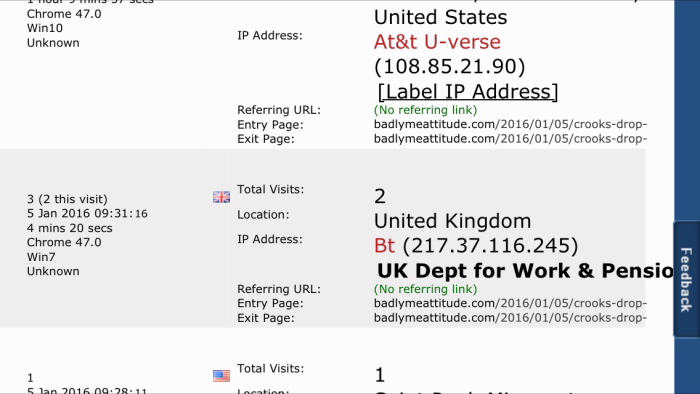 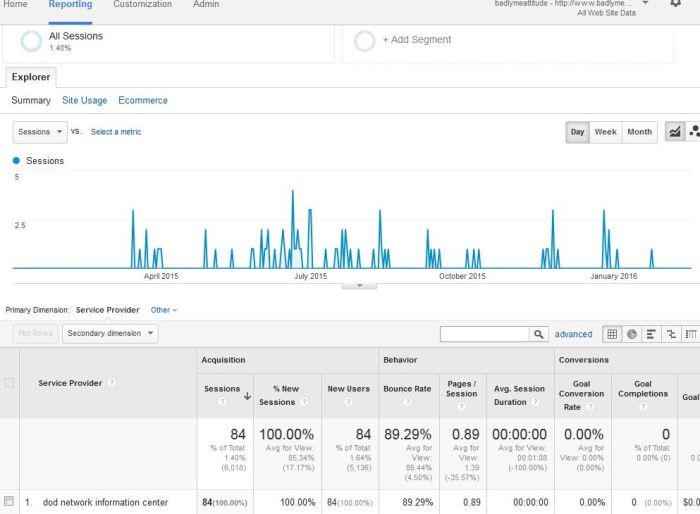 Maybe I should be honored to have been noticed by prestigious academic institutions and hospitals.

There’s plenty more where those came from.

Another thought: Maybe I should revel in the vile, irrational commentary which serves merely as character assassination, for it tells me that I’ve been heard, and someone, somewhere, is throwing a tantrum over the secret I spilled.

Would you kind and very important readers like to tell me what it is that you most enjoyed reading?

Was it the Lyme Cryme charge sheets, which describe in precise detail the who/what/where/when/why and how the whole Lyme disease scam went down? I rather enjoy the charge sheets, myself. In fact, we gave them to a bunch of legislators when we were in Washington, DC last year. I bet they liked them, too. (Maybe I will start mailing them to all elected officials. Or maybe I will mail them randomly so you never know who’s going to get them next! Good times!)

Was it the Occam’s Razor, which is chock full of scientists who say the same thing in many different ways? It’s hard to dispute that kind of evidence, especially when the crooks agree.

You guys get it, right? You inject a fungalish antigen, either by tick or by syringe, either intentionally (LYMErix) or maybe unintentionally (contaminated vaccines), and the outcome is this freak show of post-sepsis immunoparalysis that no doctor can diagnose because they are trained to only look for antibodies. But you knew that. Good stuff, right? Right??
Now, here’s the problem: All these super-important fans (many more than shown above), and not a single one has spoken up for us victims. I got on my knees and begged for help in my AIDS 2.0 post. Man, was it hard to suppress the snark. Snark is my thing. It’s practically my brand. Snark®.

Some would say we moms are impatient, on top of all of our other maladies that are caused by our lively imaginations. Dr. Kenneth Liegner, though well-intentioned, suggested holding on a bit longer for recognition of our valid AIDS-like illness.

“It took medical science roughly 500 years to gain a good understanding of syphilis,” Dr. Liegner said. “We are but 40 years in to Lyme disease, caused by a spirochete considerably more genetically complex than Treponema pallidum, the organism causing syphilis.”

Too bad we don’t have that kind of time. We are dropping like flies:

“White women are dying at a slightly younger age than in the past. That’s according to a report released Wednesday by the Centers for Disease Control and Prevention’s National Center for Health Statistics.
The life expectancy for non-Hispanic white women in the United States declined by one month — from 81.2 years to 81.1 years — from 2013 to 2014. Though one month may not seem like much, demographers worry — it’s the first time since the government began keeping records that white women’s life expectancy has declined, according to the report.”

And if we pesky creatures don’t drop of “natural” causes, we swat ourselves.

“Suicide rates have soared 24 percent in the U.S. since 1999, with the biggest increases among women, federal researchers reported Friday.”

Those two news items received quite a bit of fanfare over the last few days, with a heavy dose of shock and awe. Most of the speculation over the reasons tended toward alcoholism and drug abuse, as was discussed in the NPR article. So there you have it. We moms, as a group, are not only hypochondriacs, but drunks and druggies to boot. According to the government.

Yet, here we have HHS explaining that women are disproportionately affected by ME/CFS:

“Chronic fatigue syndrome (CFS), also referred to as myalgic encephalomyelitis (ME) or ME/CFS, is a complex, chronic illness that affects about 1 million Americans. Women are two to four times more likely than men to be diagnosed with ME/CFS. People with ME/CFS experience a range of symptoms that makes it hard to do the daily tasks that most of us do without thinking — like dressing or bathing. Currently, there are no Food and Drug Administration-approved treatments specific for ME/CFS. Usually, treatments focus on relieving the symptoms.”

Yes, we know that treatments focus on relieving the symptoms. We’re well aware of that, having long ago exhausted our options for doctors who aren’t brainwashed.  But here’s the thing. You government hacks are encouraging [read: requiring] malpractice treatment of us whiny, self-loathing, neurotic, addicted moms with vodka-saturated livers.

When we’re completely worn down by your malpractice, non-treatment, victim-blaming system, we give in to your “symptom treatments.” We may temporarily relieve one symptom, but we’re making a deal with the devil every time. It’s a matter of trading a symptom for a side effect. But damn it–when that symptom consumes our life we are willing to pop any color pill, just to make it stop for a day, or even an hour.

The biologics make us fat and even more vulnerable to infections.

The psych meds make us good and psychotic. The pain pills ruin our brains even more than they’re already ruined. Even the freaking antacids are killing us. Check this out:

“Older adults [i.e. those with immunosuppression and/or signs of dementia, not necessarily geriatric-ed.] might want to avoid a using class of drugs commonly used in over-the-counter products such as nighttime cold medicines due to their links to cognitive impairment, a research team led by scientists at the Indiana University School of Medicine has recommended.
Using brain imaging techniques, the researchers found lower metabolism and reduced brain sizes among study participants taking the drugs known to have an anticholinergic effect, meaning they block acetylcholine, a nervous system neurotransmitter.
Previous research found a link between between the anticholinergic drugs and cognitive impairment and increased risk of dementia. The new paper published in the journal JAMA Neurology, is believed to be the first to study the potential underlying biology of those clinical links using neuroimaging measurements of brain metabolism and atrophy.”

Here’s the table with all the anticholinergics listed:  ACB_scale. Set aside a few hours to get through that list.

***It is very important to understand*** science says that CNS-depressing drugs are contraindicated for CNS-depressing diseases. As demonstrated by Eli Lilly’s fine for killing old people with Zyprexa.

“American pharmaceutical giant Eli Lilly and Company today agreed to plead guilty and pay $1.415 billion for promoting its drug Zyprexa for uses not approved by the Food and Drug Administration (FDA), the Department of Justice announced today. This resolution includes a criminal fine of $515 million, the largest ever in a health care case, and the largest criminal fine for an individual corporation ever imposed in a United States criminal prosecution of any kind. Eli Lilly will also pay up to $800 million in a civil settlement with the federal government and the states.

Eli Lilly agreed to enter a global resolution with the United States to resolve criminal and civil allegations that it promoted its antipsychotic drug Zyprexa for uses not approved by the FDA, the Department said. Such unapproved uses are also known as “off-label” uses because they are not included in the drug’s FDA approved product label.

Assistant Attorney General for the Civil Division Gregory G. Katsas and acting U.S. Attorney for the Eastern District of Pennsylvania Laurie Magid today announced the filing of a criminal information against Eli Lilly for promoting Zyprexa for uses not approved by the FDA. Eli Lilly, headquartered in Indianapolis, is charged in the information with promoting Zyprexa for such off-label or unapproved uses as treatment for dementia, including Alzheimer’s dementia, in elderly people.”

Even Psych (who don’t know the word ‘valid’) say treat the disease before prescribing zombie meds:

“Pharmacologic treatment of agitation should be based on an assessment of the most likely cause of the agitation. If agitation results from a delirium or other medical condition, clinicians should first attempt to treat the underlying cause instead of simply medicating with antipsychotics or benzodiazepines.”

To recap: The government says women are more likely to get immunosuppression diseases but denies that they are real diseases with a valid biologic cause and says to “treat the symptoms” with pharmaceuticals even though such drugs are contraindicated for, and can even cause death in, this patient population.
Yay government!
But to add insult to injury, they then say, “Isn’t it curious that women are dying younger, sicker, and poorer? And that they kill themselves at the highest rate in history?” Duh. There’s probably a small cohort who kill themselves over the mind-boggling stupidity of the government. There must be a grant to study that.

Like I said, I’m just a regular mom. I happen to have a CNS-depressing disease. And gosh, you know what? I don’t even need the meds: my brain is so addled that I have a compulsion to write about true things, even secret true things that certain people would prefer to keep secret. It’s sort of to the point of being disabling.

So, I ask you this, CIA Spooks: Are you enjoying my blog? And Sweeg, don’t answer. You can bite me.