“After ticks attach and begin feeding, the spirochetes rapidly multiply, down-regulate or *shed* OspA, and up-regulate OspC during their migration to the salivary glands (41).”

This is what spirochetes do. It’s called antigenic variation, and it’s one technique they use to avoid immune system attack and stay alive. Clearly, what the authors are saying is that antigens are down-regulated by being shed by the borrelia and the “up-regulated” antigens are the ones that take the place of those that were sloughed off. The technical term for that is “blebbing”. It’s funny to see this in print, because usually when this mechanism is discussed, it’s treated as if the antigens just magically change from one to another. Poof! The OspA is gone, and now we have OspC. Obviously that’s not the case, though, and when OspA is down-regulated and OspC is up-regulated, the OspA blebs end up in the sludge of the tick’s gut contents.

See the image below which illustrates the abundance of free-floating antigenic blebs of borrelia goo.

What happens to the OspA blebs?

Funny you should ask. Just a wild guess, but maybe they get excreted into the human victim every 5-20 minutes?

“In a blood-feeding tick, saliva production is the main mechanism of water excretion [3, 4]. Ticks alternate blood ingestion and salivation, each cycle lasting for 5–20 min at a time [5, 6]. The gut pumps water and electrolytes into the haemocoel, which go back to the host via saliva, while the meal is concentrated in the midgut.”

So, if a Lyme vaccine manufacturer claims that its product causes production of anti-OspA antibodies that supposedly get sucked up by a tick, travel to the tick’s gut and kill or otherwise disable the spirochetes, that’s a lie. Because what happens is the spirochetes slough off the OspA to produce OspC. They certainly don’t die. And the OspA blebs don’t just disappear. They make their way into the tick’s salivary glands up to 12 times per hour.

And guess what? It’s not just OspA that’s problematic. According to Mario Phillip of Tulane University, the other surface proteins are likely also triacyl, meaning that they DO the same thing as OspA.

Not only L-OspA but also Pam3Cys was able to induce IL-6 production. ****Since all spirochetal lipoproteins likely share the Pam3Cys modification**** it follows that any lipoprotein should be able to effect production of IL-6 from astrocytes.

So, it doesn’t really matter if you get injected with OspA, OspC, OspXYZ; if they’re all triacylated, that means you’re screwed. And what these triacyl lipoproteins DO is not pretty:

“IL-6 is produced by diverse immune and neural cells, including macrophages, B and T lymphocytes, which may enter the CNS from the periphery [43], as well as neurons, microglia and astrocytes [44]. In the CNS proper, IL-6 exerts both beneficial and destructive effects [45]. Destructive effects of IL-6 are associated with excess production of this cytokine. IL-6 overexpression is thought to be a factor in numerous CNS diseases, among which are AD, amyotrophic lateral sclerosis, MS, stroke and septic shock [45]. Since IL-6 is able to promote astrocyte proliferation [35], it is therefore thought to be a factor in astrogliosis. It is not clear whether astrogliosis is itself deleterious in diseases in which IL-6 overexpression is apparent, or a concomitant phenomenon.”

What’s more, CDC and friends published that borreliosis is far more complicated than spirochetes expressing a single outer surface protein depending on environment. That means they know that it’s ridiculous to claim that a Lyme “vaccine” works AT ALL….let alone that it works via the tick’s ingestion of OspA-antibody-laden human blood.

“To our surprise, what we observed was not simply a matter of one protein being expressed in the gut and another in the host,” Dr. de Silva said. ”What the tick actually spits into the host is a bacteria population that is highly variable.”

“The study, whose co-authors were Dr. Jun Ohnishi, a postdoctoral researcher, and Dr. Joseph Piesman, of the division of vector-borne diseases at the Centers for Disease Control and Prevention in Atlanta, was reported last month in The Proceedings of the National Academy of Science.”

In US Patent 6,719,983 Alan Barbour agreed with Piesman and Ohnishi, describing what that highly variable bacteria population does:

“An important aspect of the invention is the recognition that Borrelia VMP-like sequences recombine at the vls site, with the result that antigenic variation is virtually limitless. Multiclonal populations therefore can exist in an infected patient so that immunological defenses are severely tested if not totally overwhelmed.”

What he’s saying is that the lipoproteins expressed by Borreliae are so widely variable that the immune system cannot fight the infection. There are too many targets, they’re constantly changing, and some aren’t even attached to the offending organism!

“…immunological defenses are severely tested if not totally overwhelmed.”

And, just because I like this Report: Martin & Marques of NIAID also published about the horrors of OspA on the brain while humoral immunity was blunted:

These results show that signaling through TLR1/2 in response to B. burgdorferi can elicit opposite immunoregulatory effects in blood and in brain immune cells, which could play a role in the different susceptibility of these compartments to infection.

You get brain inflammation while the rest of the immune system is suppressed. And that’s just from OspA. It has nothing to do with spirochetes drilling into tissues.

Now that we can put to rest the notion that the production of a single type of antibody, such as anti-OspA antibodies, can prevent Lyme disease, let’s review the data on transmission time:

“A study by Piesman (CDC) et al found infected ticks with bacteria in their salivary glands and other organs at the onset of feeding, and even before feeding began.26 Lebet and Gern demonstrated that 11% of field-collected unfed nymphal ticks had systemic infection,42 and Leuba-Garcia et al found that 36% of unfed adult I. ricinus ticks collected in two districts of Switzerland had systemic infection, and they commented that this could impact transmission time in humans.43 These results suggest that in cases where the spirochetes are present in the tick salivary glands, they can be injected into the host during the preparatory transfers of antihistamines and anticoagulants prior to the commencement of feeding, ie, immediately after attachment of the tick to the host.”

In other words, avoiding the bite is the only way to protect yourself from tick bite sepsis/post sepsis. CDC says spirochetes are already in the tick’s salivary glands when feeding begins, and that they express variable surface antigens when they’re there. A vaccine can’t work because these lipoproteins blunt the immune response; the immune system may be “totally overwhelmed,” according to OspA patent owner and former Willy Burgdorfer employee Alan Barbour. And the makers of OspA “vaccines” are frauds to claim that injecting OspA….

a) does not cause the disease;

b) can provide immunity against an organism that is designed to avoid the immune system through antigenic variation; and

This has been a public service announcement brought to you by the people who know WTF is up with Lyme science. Wasn’t that fun? 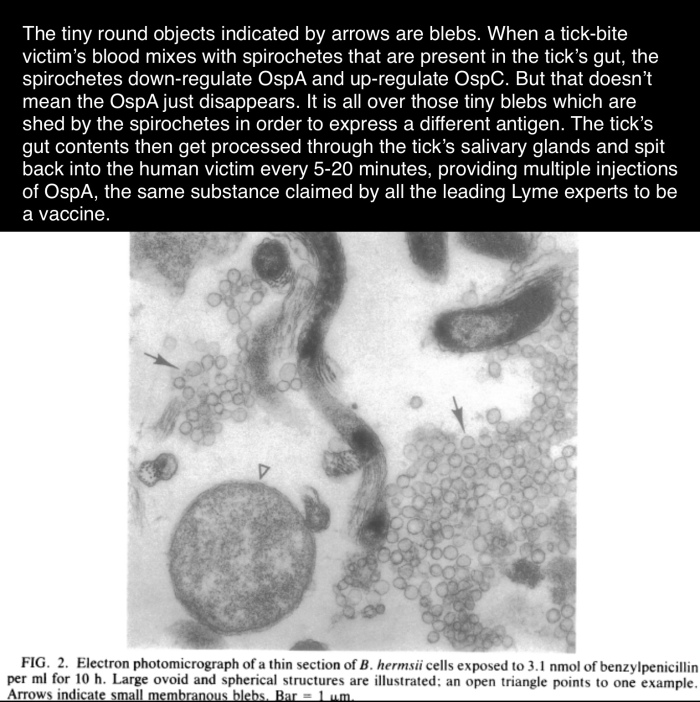 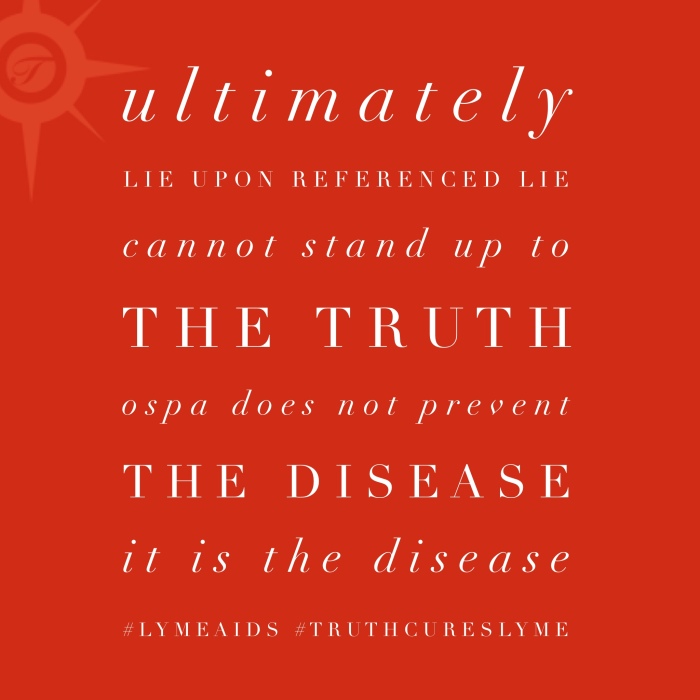 Like Loading...
‹ Bay Area Lyme Foundation Funds the Crooks
Why There Can’t be a Real Lyme Test ›